When my Grandmother passed away somewhat unexpectedly in 2005 at the age of 81, my Grandfather had a lot of cleaning & purging to do before he moved up to a retirement home near Tacoma, Washington. One of the upshots of all that closet-clearing was that I was bequeathed an enormous box full of my Grandma's 2,000+-strong postcard collection. They were gathered throughout her entire life, primarily through her childhood and young adulthood - so most are from the 1920s, 30s and 40s. Many are addressed as well to my Grandfather, who unfortunately left this astral plane himself late last year (a saint! a saint he was!). For whatever reason, the box just sort of sat in my garage until this morning, when I decided to go through the whole thing and pull out the gems. Click directly on any of them for a better view. Let's start with the #1 ringer right here, and in the course of this and future posts I'll tell you about the rest of the collection and about these two people: 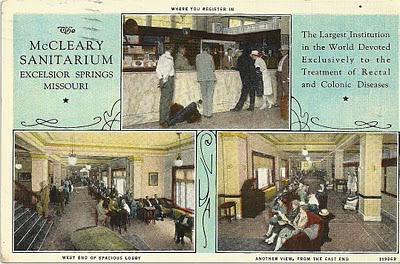 Not only do I love that there's a postcard commemorating "The Largest Institution in the World Devoted Exclusively to the Treatment of Rectal and Colonic Diseases", but that it was actually sent by a patient ("Dorothy") at the "sanitarium" to my Great-Grandmother, Dale Houx, on April 22nd, 1937. It says, in part, "Well I have been down here for a little going on, but I feel fine today...". So much for the generation that kept their problems to themselves, right?

Next is a postcard shot of Orofino, Idaho, where my Grandmother grew up in the 20s and 30s. Marvel Walter was raised a very pious Christian woman, about as midwest/northwest "salt of the earth" as they came. She barely possessed a ironic bone in her body, so unfortunately a good majority of the postcards are of churches, windmills and landscapes, and not the wacked-out motels, sexual double-entendre cartoons, alcoholic "joke" postcards and the like that I was hoping to find. I mean, just look at Orofino: 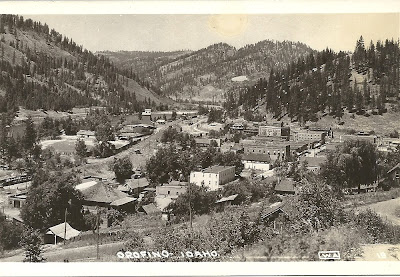 But hey, here's a pretty good one. Check out the bellman carrying the golf clubs and purple suitcase. Mammy!: 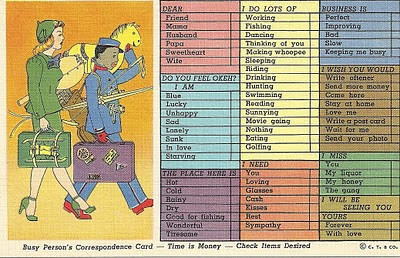 Here's an old feller going gung-ho after the big ones at the Yellowstone "Fish Pot", circa 1930s: 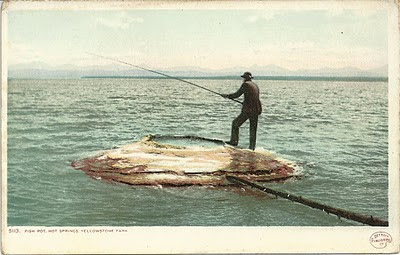 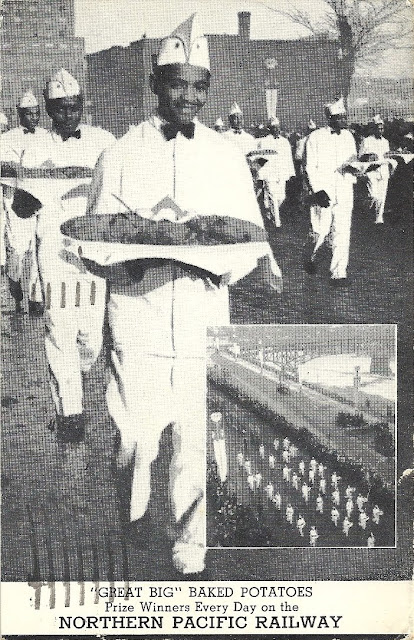 Finally, take a gander at the glories of early 1960s air travel with this pair of bad-ass propeller jets from 1961. My Grandparents were frequent world travelers, and I got to experience international travel to China and Eastern Europe with them, along with several trips up to the Pacific Northwest and Canada. 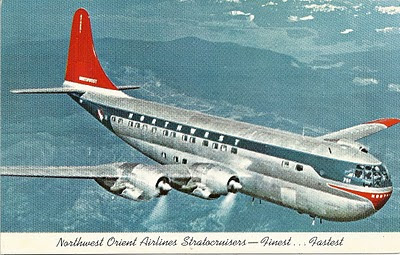 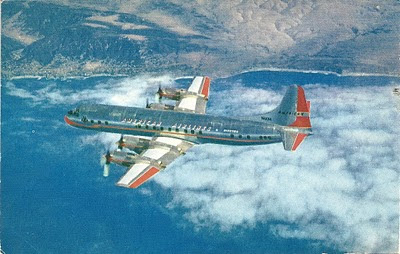 I'll have many more of these to share in coming months.
Posted by Jay H. at 4:31 PM