“THE TREASURES OF LONG GONE JOHN” 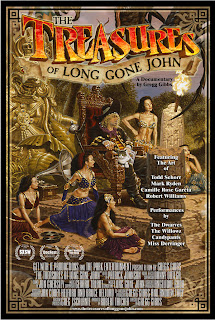 This played a local documentary festival a year ago and I was sorta kicking myself for not going. It’s not that the “outsider art”/JUXTAPOZ scene’s all that interesting to me – though I do like some of that stuff, especially the Mark Ryden “meat” paintings (I guess that’s all of them?) – but it was the prospect of a documentary on the uber-obsessive collector/fetish mentality that appealed to me. See, I’ve actually been to Long Gone John Mermis’ place – his collector’s vault of a home that holds all his kitschy treasures and artwork. We’re not really pals or anything, but he was an early and enthusiastic supporter/advertiser in my SUPERDOPE magazine back in the day, and he’s a good friend of some of my friends. One day one of those friends took me by his Long Beach home when I was visiting Southern California, and I was pretty floored by the collection of Keene eyes paintings, weird 1950s dolls, flashback toys, etc. This was probably 1993 or 1994, so it was even before Robert Williams and others even started to document quote-unquote lowbrow art in JUXTAPOZ. It’s fair to say his collection – and obsessions – have only magnified and grown in the intervening years.
“THE TREASURES OF LONG GONE JOHN” careens around a few topics during its 90 or so minutes. There’s Long Gone John himself, and what drives him to collect this stuff. He is a true, and very unlikely, patron of the arts. Mermis is a guy who had everything stacked against him for a pretty rotten life – bad parenting, aimless sense of life direction, drugs etc. – and yet I can attest that he’s what you’d call a “lovable guy”. You will too, after watching the film. He actually commissions work by these painters and sculptors for his own use and enjoyment, and this is not a guy with a ton of money or who has run a ridiculously successful record label. Sure, his Sympathy For The Record Industry label had the first two WHITE STRIPES albums – I’m sure that’s put a few meals on the table – but you really get a sense in this doc that hoarding this strange, colorful lowbrow art is a passion that pretty much all of his money is poured into.

The film’s also about that art “scene” and how people like Robert Williams and Mark Ryden brought it to life, and how Mermis then furthered the cause. One thing that really bugged me was the cutesy way the directors “animated” the paintings themselves and made them spring to life when showing them off. Apparently a simple scan of these ridiculously ornate and eye-grabbing canvas was too boring? The film also sets up a little bit of discussion about living and rich & rewarding life well outside of the mainstream, and I thought they could’ve gone a little deeper here. Overall it was a solid way to spend an hour and a half, despite some drag, and I’d recommend it to any folks with collector/hoarder/anal retentive blood running through their veins.
Posted by Jay H. at 5:52 PM